skip to main | skip to sidebar

To All Our Friends!

Another year has blurred by and I have been thinking about some of the highlights. Skiing Noshoe with Greg, Van and the fearless sprouts. It is time to plan the next one already! Mountain biking Tsali with Dr. Melvin (poster boy for the Tsali smack down) & Riki. You know we are all waiting/praying for the trails to dry for winter rides! The family trip to Little Switzerland. Watching Leah progress sailing without the dagger fin, getting the beach start, the quick tack, getting comfortable in higher wind at Canadian Hole and getting in the footstraps with the harness lines. Jasper his first time windsurfing- at the outer banks no less. He's still the fastest learner I've seen yet and the trips were a blast! George, Ken and Andy talking me into my first sesh ever in the ocean for Hatteras Wave Jam. My sister Jennifer showing off with the Starboard GO for the crowd of spectators at Dales Seafood lake Waccamaw. The epic Fall trip to the outer banks with the Charlotte guys and Mark. This was my second set of sessions with the Fall Wave Jam and tons of fun to get out there with the pros! Mac, Rob and Mark got me into paddle surfing and sail surfing the SUP board. Truly awesome times. 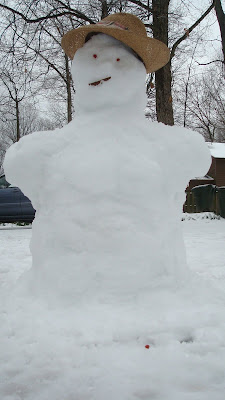 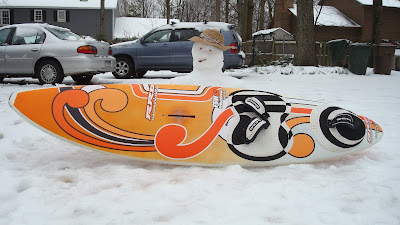 Always have your small stick in a bliz 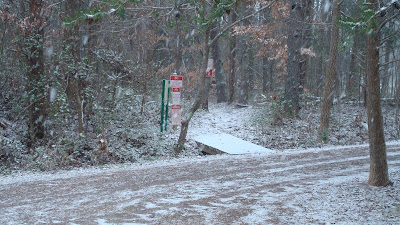 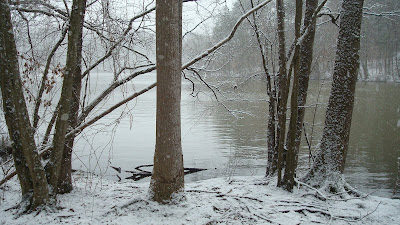 Big puffy flakes on the trail by the lake 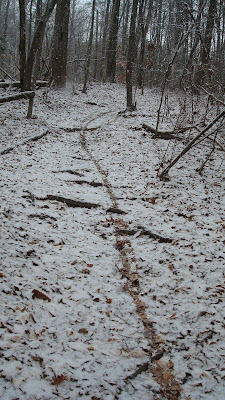 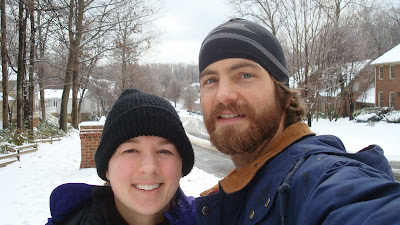 Wind for Stokesdale Part 2 (The Ecstasy)

I left work just after lunch yesterday when the wind charts started showing activity. Pulse quickend and the heart all a'flutter in the warm sunshine. When I parked at the lake it was cloudy and at least 10 degrees cooler than Greensboro. Neither are all that bad but no wind to boot. Tony showed up later when the sun finally came out but the wind never showed up. Around 4:30 Don came roaring down the road all fired up for some bump'n'jump to find us de-rigging.

Then there is today. I just finished a major project this morning. I had a 6:30am meeting so I didn't bring my gear- plus the forecast sucked. At any rate the wind charts were showing SW > 15mph! I bolted after lunch, shot home to grab my formula board and hauled ass to Belews with the low end dragging. Naturally when I pulled up at Belews it was blowing 5.8m^2. So since I had only my formula board I rigged the 7.5 and set out. I had a blast. Literally. That 7.5 zephyr was outhauled tight as a drum. The wind was clean and steady in front of the power plant and the jibes were on! I think I now have more of a idea how those formula windsurfing gurus race over powered. Rake that sail back, lean on that fin to get the weather side of the board out of the water to avoid swell washing over the whole board. (if it does it feels just like running aground) Entering your jibe force your nose higher so the swell doesn't grab your nose. Lean on the inside rail and lift the foot strap on the outside. Continue as prescribed and you have just carve jibed a formula board! One thing to note is I put the true ames weed fin on the formula and it worked like a champ with the 7.5 Looks like I'm ready for some light air canadian hole blasting...

So OK. I think I got now. When the forecast is for high wind I'll adhere to the following

So after much thought and careful planning whatever game plan I come up with for the forecasted wind I'll now know to do the opposite. Man I really needed this great sesh.
Posted by rdm at 8:46 PM 2 comments: Links to this post 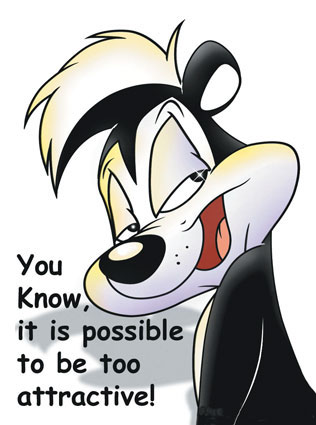 Posted by rdm at 8:12 AM No comments: Links to this post

rdm
Greensboro, NC, United States
I'm a weekend warrior all about getting the most out of what NC has to offer. Wave sailing & surfing are my Fight Club. Most local action is with the Triad Windsurfing Club at Belews Lake in Stokesdale, NC. Email me if you are interested in windsurfing, surfing or paddling.

Just when you thought you were skunked.